Menu
Log in
Register
Install the app
You are using an out of date browser. It may not display this or other websites correctly.
You should upgrade or use an alternative browser.

First of all, I’m a new member to the forum, have spent the last few days reading and learning before posting up a new thread. The wealth of knowledge contained & shared by members is very much appreciated.

After chasing a Navara for 6 months I’ve finally brought my daughter a 2006 D22 ZD30 as her first car as that’s what she wanted. Got it for $4k with a few accessories but also with the issue of not starting.

The seller was very helpful and upfront with what had been done previously to the vehicle and what had been done to fault find the issue. Thinking that it’s most likely the pump and knowing the cost of replacing the pump we still thought it was a good buy and chance for my daughter to learn more than just “checking the oil and tyre pressure” maintenance.

BACKSTORY
The seller was driving home after a camping trip, stopped at a set of lights, went to leave the lights and engined stopped. Towed it home, checked codes and got the following

The seller checked for air leaks using clear hoses and also primer goes hard after 3 pushes. He said it would fire & briefly run on start ya bastard. He also confirmed there was diesel at the injectors.

I got it home a few days ago and after some reading on here started my own fault finding journey.

Removed, inspected and metered every fuse which could be located.

Extracted fault codes and got the same as above but also 0407 Crank Angle Sensor. Cleared faults, checked again and only got 0505 which I think is “System OK”.

Checked glow plug connecting plate for voltage and it was good.

Primed the fuel line and pump was hard after 4 pushes.

Turned over engine and while it turns over fine there was no sign of any cylinder firing.

Removed #1 Glow Plug and it was dry. Also sniffed exhaust and no diesel smell whatsoever.

Removed intake/throttle body to get to all injector lines and ensure there was no blockage. Cracked injector lines one at a time and cranked motor. Got diesel out of lines 1, 2 & 3 but none out of 4.

That’s as far as we got yesterday.

Given previous owner said it would fire on “Start Ya Bastard” I’m assuming the camshaft timing and compression is ok. While I do have a diesel compression test kit I don’t have an adaptor to suit the length of the ZD30 glow plugs.

As a side note is using Start Ya Bastard an accepted and safe way to check if cylinders will fire?

After getting diesel at 1, 2 & 3 I was thinking it might be a case of blocked injectors but getting nothing at 4 and finding no signs of diesel getting into the cylinders makes me think it’s the pump. Maybe it’s not making enough pressure to crack the injectors open.

If there was diesel getting into any cylinder I would of expected a cough or splutter.

Next step is to unplug, inspect and clean all loom & sensor plugs.

I brought the vehicle knowing it could be the pump and expecting to replace the pump but hoping there is a definitive way to prove it is the pump.

I checked for codes again at the end of fault finding and only got 0407 Crank Angle Sensor again.

Lastly is there any tips/advice to removing the injectors?

My daughter is certainly learning a bit more about her first car.

Interesting YouTube clip on how to test the CAS and the resulting ECU Signal to the IP.

Hi Shane,
Just to confirm. This is the Common Rail injection motor?
S

The introduction of the CRD was a year later in 2007.
R

The Patrol was sold with a common rail ZD30 engine. The Navara only had the (earlier) ZD30 without common rail, and later the common rail YD25 engine (and a few earlier engines, omitted for brevity)
O

Hi Shane,
I had a problem with a 2003 Patrol that developed this problem for while.
In short it was the filter primer. Cost me a bucketload because it did it in Kununurra after being on the Gibb River road.
The morning after being on the rough road it would not start. I had a primer bulb and hose with me and went straight to it (because I suspected I had cracked a fuel line on the rough road) which I connected on the tank side of the delivery to the filter and primed and kept priming with that bulb until it started. It took a bit and I also found that I had to crack the injector pipes to get the air out while being cranked before it would even look like firing.
Talking to a Nissan tech in Perth later he told me that the primer itself starts to let air in and it will not be able to pump properly if you are trying to use that alone to prime. It will just keep putting air into the system. That certainly tied in with what I had found by luck.
I am not sure if your motor would run the same type filter as the one I had but I have attached a photo that you can compare.
Hope you win the battle soon. 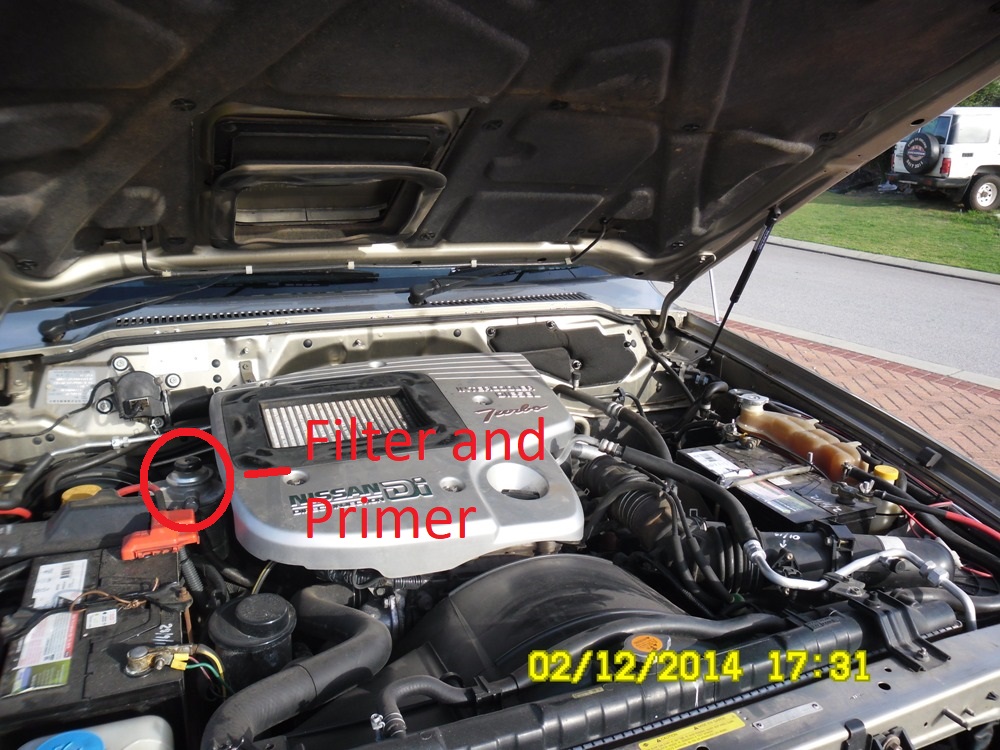 Thanks for the advice Olpha

I followed the steps to test the CAS as per the YouTube clip I posted earlier and found I was getting no voltage when testing between the positive on the battery and either of the 2 earths (brown and grey wires in the engine loom plug) but same voltage as the battery on any other earthed point in the engine bay.

I really need an Oscilloscope to prove beyond doubt but given the only fault code I am now getting is the CAS Fault I’m hoping it’s a stuffed CAS and the pump is ok.

Will call Nissan dealer in the morning and see how many weeks worth of wages a new one will be.

An excellent Father Daughter project. Hope it works out well for you both. Love my YD25 D22.
R

I think it should still start without a crank angle sensor. The pump is mechanical and will always inject at TDC due to being directly gear-connected to the crackshaft. It has some electronics to adjust the injected amount and vary the timing slightly, but if that timing is off it will only run rough.

If it fires on starting fluid, you can assume the valve timing and compression are good enough to have it run.

And as you are getting a variety of pump/injection related errors I would suspect either the pump, the ECU, or the wiring in between.

Since the pump is the most expensive, I would start with the rest. The ECU isn't linked to the injectors and pretty easy to replace.

If nissan want an arm and leg get a price from Nizzbits , he's prices are always better.
Does seem as though it's the crank angle sensor but check the plate on the back of the crank pulley/damper. the 4 corners stick out and that's what the sensor reads off.

Rumpig said:
If nissan want an arm and leg get a price from Nizzbits , he's prices are always better.
Does seem as though it's the crank angle sensor but check the plate on the back of the crank pulley/damper. the 4 corners stick out and that's what the sensor reads off.
Click to expand...

Is Nizzbits still around? I remember buying off him back in the mid-2000s. I've been away from the scene for a while.

Big Nate said:
Is Nizzbits still around? I remember buying off him back in the mid-2000s. I've been away from the scene for a while.
Click to expand...

Their web site is still active. I guess that's a good sign!

Here at NIZZBITS we can supply almost any genuine Nissan part. What you find listed on our website is only a small sample of popular parts in our range.

Here at NIZZBITS we can supply almost any genuine Nissan part. What you find listed on our website is only a small sample of popular parts in our range.

Cheer Tony,
Didn't know he had a website. The last time I ordered from him it was a phone call after finding him on a Patrol forum.

Motor died, indicated bad injector pump, starts no issues no matter what the mechanic does

Register today and take advantage of membership benefits. It's FREE!

Did you know that registered members can turn off the ads?

Thank you! Please check your email inbox to continue.
There's already a member associated with this email address. Please log in or retrieve your password.
Already a member? Click here to log in
Top