U1000 CAN Communication Circuit.

My D40 Navara don't start......I had scan the vehicle and I am not picking up the ECU and I am getting the following codes....need help as the nissan dealers are saying my ECU has failed.....I can't believe an ECU just failed. Does anyone have the Electrical diagram for a (4X2) A/T Calibre D40 model

I am looking at the codes (characters) on the various ECU's....my P/N: 23710 KH02A and a colleague of mine has a similar model a year older bearing the P/N: 23710 JS42A. I would like to know what important characters are important when looking for an ECU...

The ECU is specific to the model, engine and transmission, so a petrol ECU won't suit a diesel, one from a manual gearbox car won't suit an auto etc. I am not sure if a Thai build will suit a Spanish car, I can't see why that wouldn't work.

Antitheft is in the BCM not the ECU, so if your ECU is fried and replaced everything else should remain the same (keys are registered with the BCM).

Before changing the ECU, have a look over the old one and try to determine what killed it. Was the vehicle jump-started improperly? Do you know what the vehicle was doing when the ECU stopped? You don't want to get a new ECU in there and the same thing happens!
C

The vehicle was parked outside and was not in use for a week..........there were some thunderstorms.......and when the wife tried to start it saw it did not start and just continued using the other car.........I changed the battery...tried to clear these codes....and rescanned the vehicle and I got the following codes....and you are right I really need to find the root cause. I don't want to put a new ECU in and poof........as I am looking on the internet for an electrical diagram to verify the wiring... 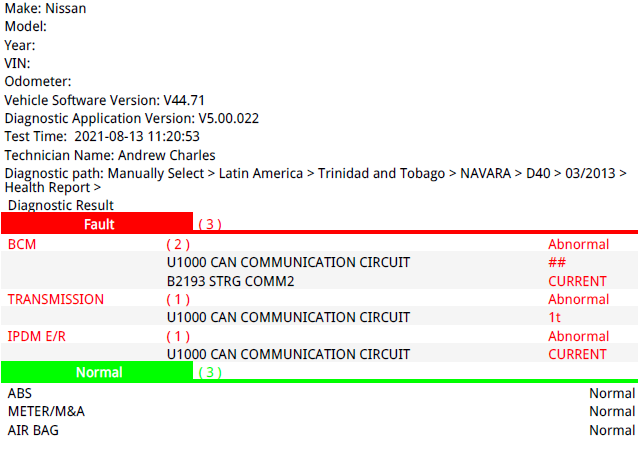 I'd pop the current ECU out and open it. Examination of the board may reveal some damage and give you the answer, rather than having to read tons of wiring diagrams and compare them to what's in your car.

It may be that the vehicle was struck by lightning, in which case I'd expect to see component damage on the negative (earth) side of the components.
C

I took your advice, and checked it.....absolutely nothing is wrong with it and what makes it worst........the van started working again.........then it shutsdown.....now it is working.......I strongly believe it could be a wiring issue.......scanned it again.......and I saw the three fault codes cleared it and now I am skeptical about driving it cause it can shutdown again........any suggestions

It sounds like either there's some damage in the wiring loom or connectors, or there's a bad electrical connection. Some D40s had an earth near the ECU that didn't have enough paint removed and didn't ground properly, causing erratic operation. I would suggest that if you do repair the earth of the ECU that you use battery sealant spray over the connection to prevent corrosion.

It would be worth checking the battery terminals and fusible links as well. It's possible to fracture a fusible link making its operation erratic (you might not think so, but it happened to me!).
C

Best advice I can give is to try the following, not in any particular order: