Daughter reports revs of close to 4000 before any change of gears in general driving. This has been since a loss of boost issue was seemingly rectified by changing the vacuum lines and boost solenoid for new. When I have been in the car it seemed it could have been an intermittent problem, or just being caused by her "lead" foot, but I am assured it wasn't the same before the "turbo" issue.

Edit: further discussion indicates only 5-10psi boost on acceleration. It is an aftermarket gauge that had a kinked hose at one stage, so I don't totally trust the readout, though I guess a partial vacuum leak would be a good starting point to be looking for.

Are there any simple things that I can be checking before taking it to the mechanics?

Can't be. I very carefully replaced one at a time when I renewed them..
M

Have since;
Next, will reexamine the function of the actuator, perhaps liberal use of wd40 while doing so.

Can I bypass the scv to test function of actuator and turbo vanes? Or should I stick with manual movement of the actuator rod and a "suck" test?

How are the brakes performing? Rarely (only a couple of times since I joined this forum in 2009) we've had reports of the brake booster having a problem. They share the same vacuum line, and when the brake booster vacuum components become faulty, they impact the turbocharger. Very noticeable during driving by the amount of difficulty in braking.

It would also be a good idea to check the EGR tube. If exhaust is leaking into the engine bay it won't drive the turbine as hard. If exhaust was leaking uncontrolled directly into the intake manifold your engine wouldn't run very well so I doubt it's the EGR valve itself. If the EGR tube has failed, you can either block it or replace it, the 2007 model doesn't do any flow detection and removing EGR will improve performance slightly.

I'd also check the ECU for any stored faults. If there's a fault with the SCV (perhaps not caused by the SCV - for instance, air entering the line around the filter) the car won't display the Check Engine Light but will still use limp mode.
M

No ecu faults. Unit has had a dpf delete; would be surprised if previous owner hadn't also done the egr block, although I can't see a blocking plate in the usual easy to reach position ... egr tube appears intact. It is in fact a very clean looking engine; timing chains replaced just before purchase and minimal evidence of seepage of any kind anywhere so far - have decided to bite the bullet and replace the last length of vacuum line on the lower side of the driver's side of the engine that I decided was too hard to reach last time. Daughter hasn't reported any drop off in brake operation that went along with the loss of boost, and has seemed fine when I have driven it. Is the "vacuum" reading that you get from an obd reader relevant in assessing the amount of vacuum available to operate the boost control? The actuator also pulsates on idle as it should. What sort of full range of motion is to be expected out of the actuator? It seems to move quite easily when sucking on the vacuum line ...
M

Brake booster is still holding vacuum for extended periods when engine is off - pryed the hose fitting out of the booster when wanting to back pressure the line with an air hose to ensure it was clear and thought I had found an issue before I saw the one way valve in the brake booster hose fitting ... back to looking.
M

Noticed a bit of seepage around the air pipes going from the turbo towards the intercooler that I hadn't noticed previously ... seems to be a fair bit inside. Something to worry about? 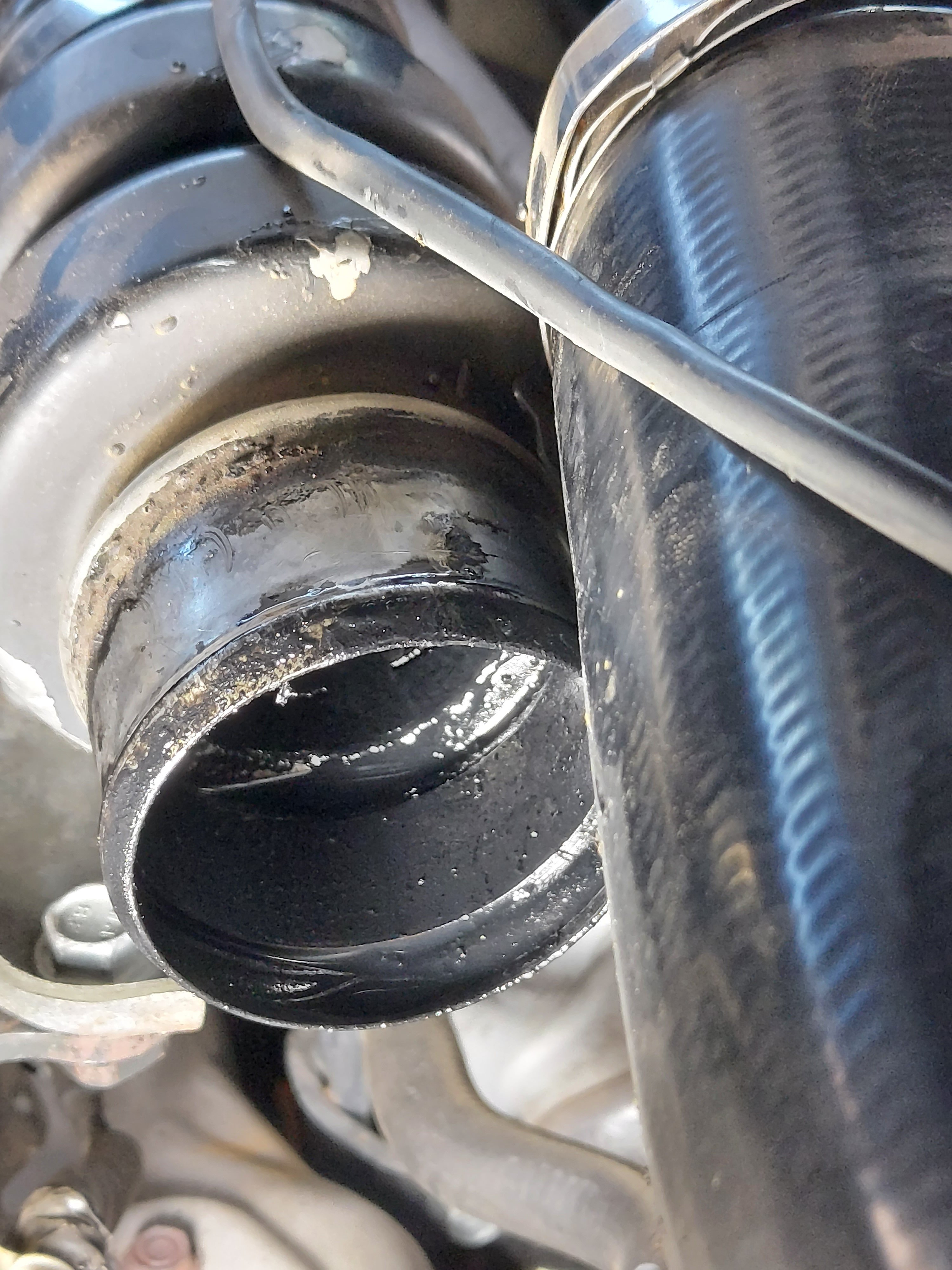 It's normal to see oil inside the pipe (the result of oil vapour created by blow-by and passing through the PCV). The particles shown in the photo are a concern. Were these visible as you removed the hose? If you clean them away and drive the car again, do they return? That's a sign of an impeller in the turbocharger that's touching the housing and wearing itself into oblivion.
You must log in or register to reply here.
Share:
Facebook Twitter Reddit Pinterest Tumblr WhatsApp Email Link